Like clockwork, millions of animals migrate across the expansive plains of East Africa in search of new grazing grounds. This spectacle takes place around the same time every year, and is absolutely astounding to witness in person, due to the sheer size of the herds migrating. This movement represents new life, a tumultuous journey and the survival of the fittest in a repeating circular pattern. For safari lovers (and in our opinion, all travel enthusiasts) observing the Great Migration in Kenya and Tanzania is a life changing ‘must-do’.

Depending on your preferred viewing experience, selecting the right timing and location of your excursion is very important. There is no way to predict the migration patterns with full certainty, as the travel paths are dependent on the rains and density of fresh grass in a given area. After years of study and documentation, we can assume the correct place at the correct time to see the magic of this voyage, so below we have outlined the ‘when’ and ‘where’ of the Great Migration in East Africa.

Every year approximately two million wildebeest, zebra and a variety of antelope migrate North from the Serengeti National Park in Tanzania to the Masai Mara National Reserve in Kenya, in search of fresh pastures to nourish the herd. Their route runs clockwise, covering almost 1,900 miles of tough terrain littered with predators and obstacles. As the migration brings new life and beginnings, close to 250,000 wildebeest perish while attempting the journey.

Watching the migration at any point is quite a spectacle, as millions of animals move as one unit, avoiding lions, leopards and hyenas as they graze. If you are looking for something a little more action-packed, river crossings at the Grumeti River and the Mara River offer dramatic encounters between predators and prey. 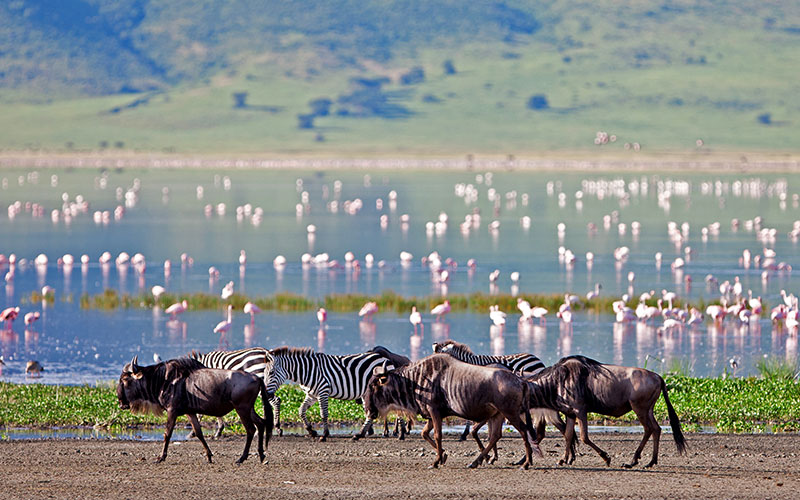 During these months a herd of millions gather in the Southern Serengeti and Ngorongoro Conservation Area in Tanzania. Calving season takes place over the span of a few weeks in February and 500,000 wildebeest are born into the herd. The animals are constantly on the move and offspring need to be able to run with the group within their first few minutes of life. This is an incredible time to see the newborns taking their first steps, along with the heartache of watching predators pick off the weaker calves. As March approaches, excessive grazing depletes the plains and the animals start to head North.  The Southern Ndutu and Salei areas are the likely place to see the largest herds this time of year, and they will continue to move with the rainfall to find new feeding grounds. 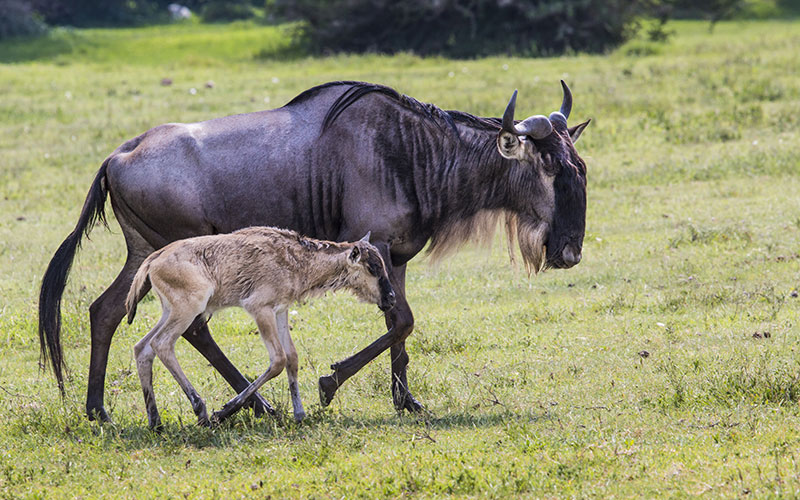 In Tanzania, the ‘long rains’ saturate the ground and the herds begin to migrate to the Western Corridor of the Serengeti. This weather can compromise the roads in the region, making it difficult to follow the animals during this portion of the migration.  Many camps close for renovation or maintenance during this time, but if the weather doesn’t bother you, this can be a unique opportunity to view the migration without crowds of other eager safari groups. As the rains subside towards the end of May, the herds move towards central and Western Serengeti. The young wildebeest have matured and as the migration continues, mating season approaches for the herd. 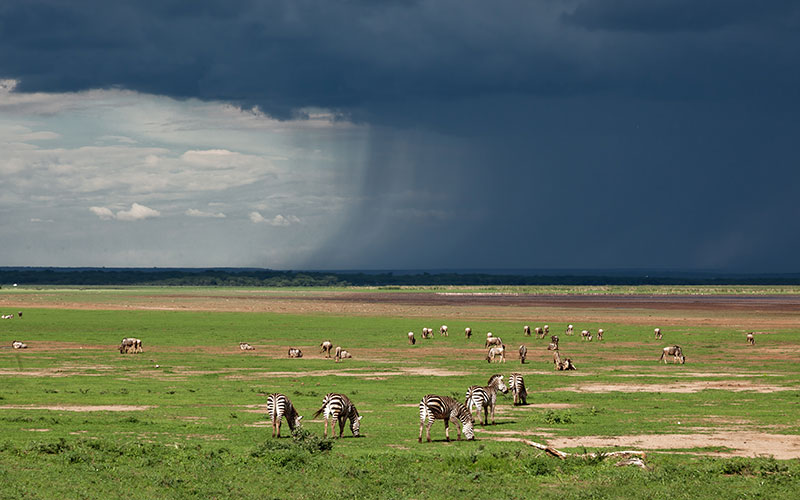 As the rains stop, mating season is in full swing and the wildebeest and zebra gradually start moving father north and individual groups begin to congregate and form a much larger ‘mega herd’. As they make their way through to the Grumeti region, the group prepares for the most difficult part of their journey: crossing the Grumeti River. This obstacle can be treacherous after heavy rains, as the river can become quite deep and crocodiles take full advantage of vulnerable animals. During these high activity months, safari camps along the river in the Western Serengeti are the best place to watch the migration unfold. 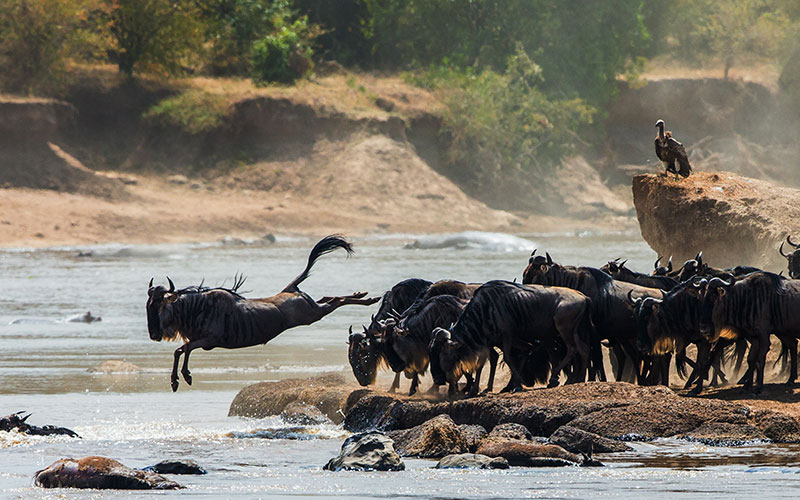 The survivors of the migration and river crossing continue to move through the Northern Serengeti and often reach the Masai Mara in Kenya by early August. The herd is challenged again with the crossing of the Mara River, which is a popular site for safari groups this time of year. August is peak season and camps can be very busy, as every game drive offers excitement watching the active herd. 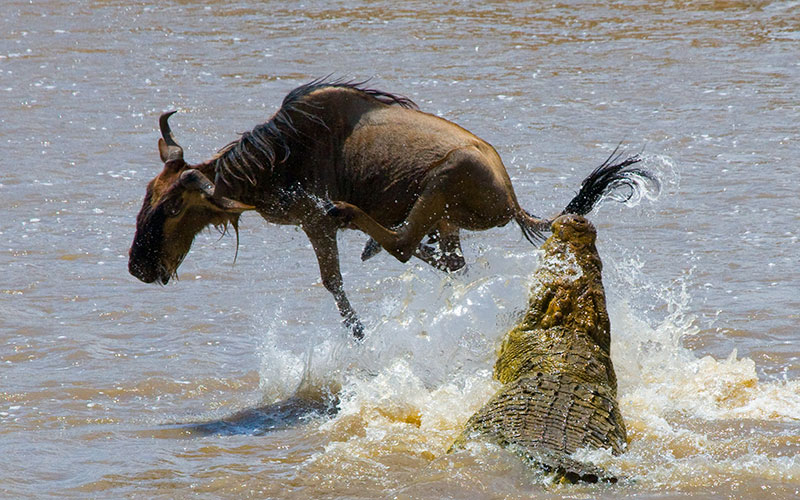 The group will graze in the Masai Mara until the rains begin again in the Southern part of the Serengeti. As the migration starts to come full circle, the herd moves through the Loliondo area towards the Ndutu plains, as the grasses will have regenerated since the herd was there a year ago. The group covers an enormous area during this portion of the cycle and are scattered throughout in preparation for calving season and for the migration to begin again. 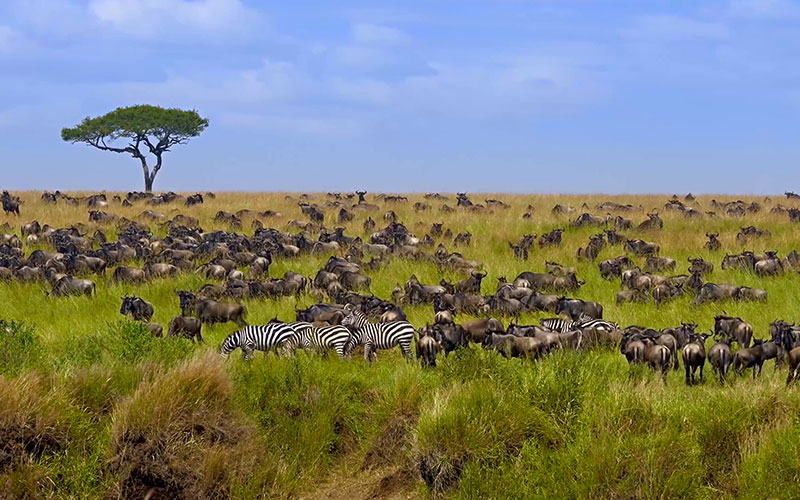 Guide to Tipping on Safari

A Typical Day on Safari in Africa