A Morning of Leopards

There is nothing quite like the anticipation of a morning game drive. The air is fresh, it’s crisp, and full of wonder of the unexpected. Almost like the drama and romance of nature’s stage is just waiting to be unveiled…

Our final morning at andBeyond Tengile River Lodge, in the Sabi Sand Game Reserve, South Africa, was no different. After a quick sip of coffee, Kyle and I were getting ourselves ready on the vehicle. It was cold, so we were wrapped up quite cozy in our blankets and hot water bottles. Our guide, Chris Sibuyi, was on the radio getting the updates on vehicle routes, tracks and signs. Before he turned to us and told us the plan. 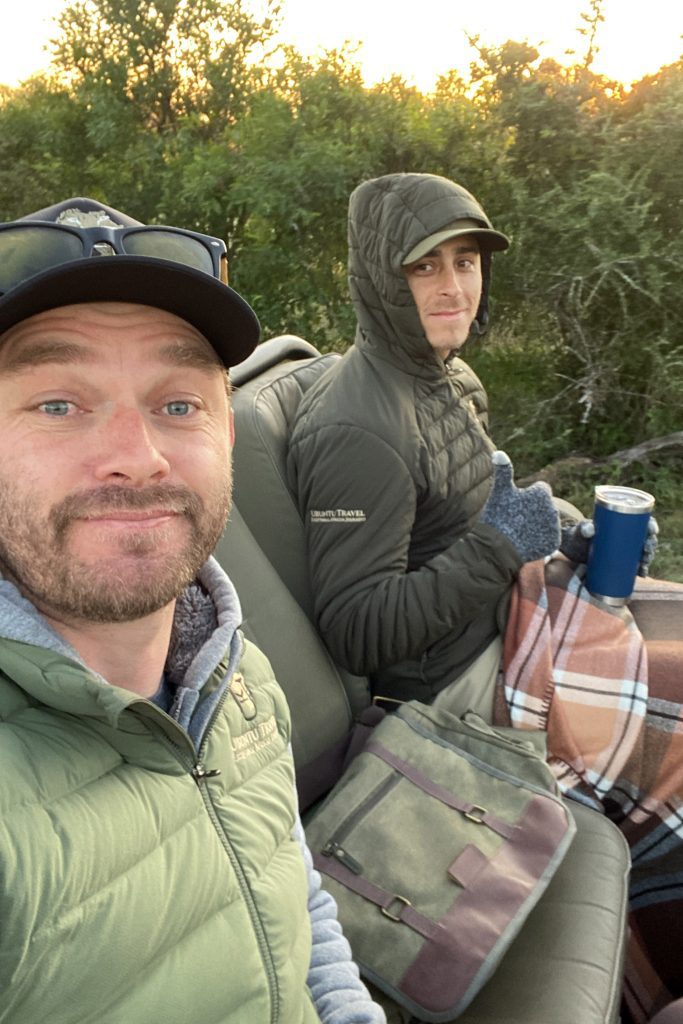 We were going to quickly “follow-up” on the last position of a female leopard and her two cubs… we were excited by the prospect of possibly finding them… but we had no idea how incredible the morning was going to turn out!

As we arrived at a dedicated off road track, that would lead us off the reserve road and towards her last known position, Chris gave us a brief description of what we needed to look for. And to help manage expectations, he also reminded us about the protocols we needed to follow in an effort to  reduce any potential pressure on the animals. andBeyond guides have strict ethical protocols throughout their lodges, resulting in unbelievable and respectful wildlife sightings. 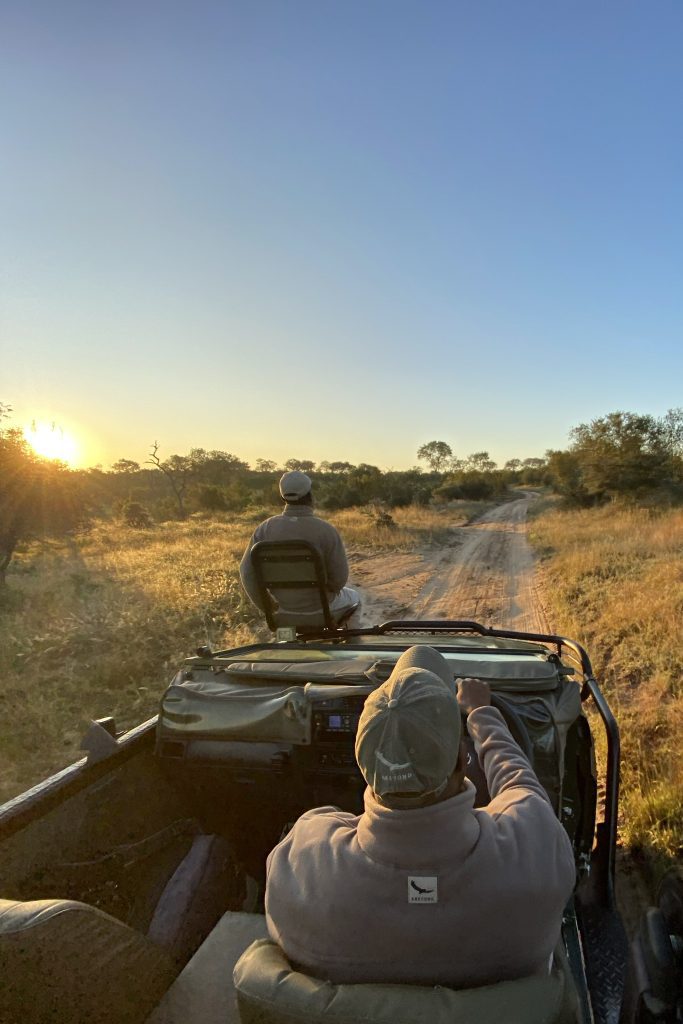 Chris cautiously followed the track off the dirt road, making sure we didn’t cause any unnecessary damage while off-roading. And as we came round to the final spot, he turned off the engine and we waited.

While waiting, however, we heard a male leopard rasping. Chris, with an incredible ear, got onto the radio and described where he thought the leopard was, and other rangers went to follow-up. With still no signs of the leopards, reluctantly and slightly disappointed, Chris suggested that the mother must have moved the cubs in the night. So he suggested, that we should go join the search for the male leopard on his morning patrol… But as Chris started reversing the vehicle started, I caught some movement in the bushes behind me. I openly thought it was just a crested francolin (a small ground bird), but something told me to just have a look. Chris patiently stopped for me to use my Swarovski Optik binoculars to scan into the thicket…

Kyle promptly got his binoculars on the movement, and there we were watching the secret lives of two cubs playing in the thick bushes! Magical!

However, there was still no sign of the mother. Therefore, we followed andBeyond’s ethical protocols and left the two cubs to play. What a sighting of secrecy… and to think, it was just us with the privilege. Now that’s natural luxury! Amazing! 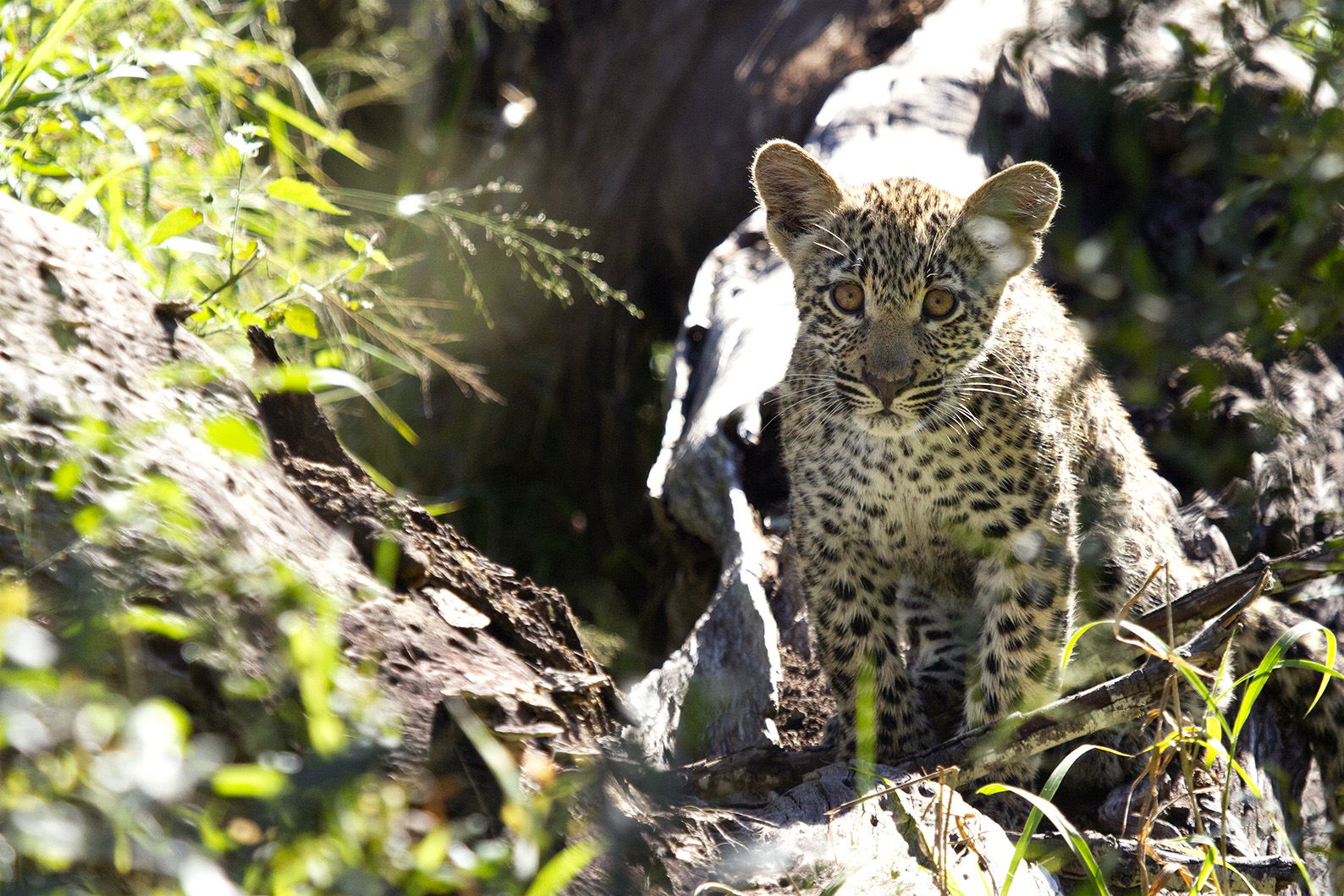 Image above: one brave and curious cub coming out into the open to investigate us.

After carefully navigating the two-track out of the area of the two leopard cubs. We moved into where Chris believed the male leopard was rasping on his morning patrol.  On the way, we stopped briefly to view two hyena cubs resting on the road. Leopards and hyena can often compete for food, so it’s always a good idea to stop and observe them for a while. It also gives one a chance to listen for any alarm or territorial calls. 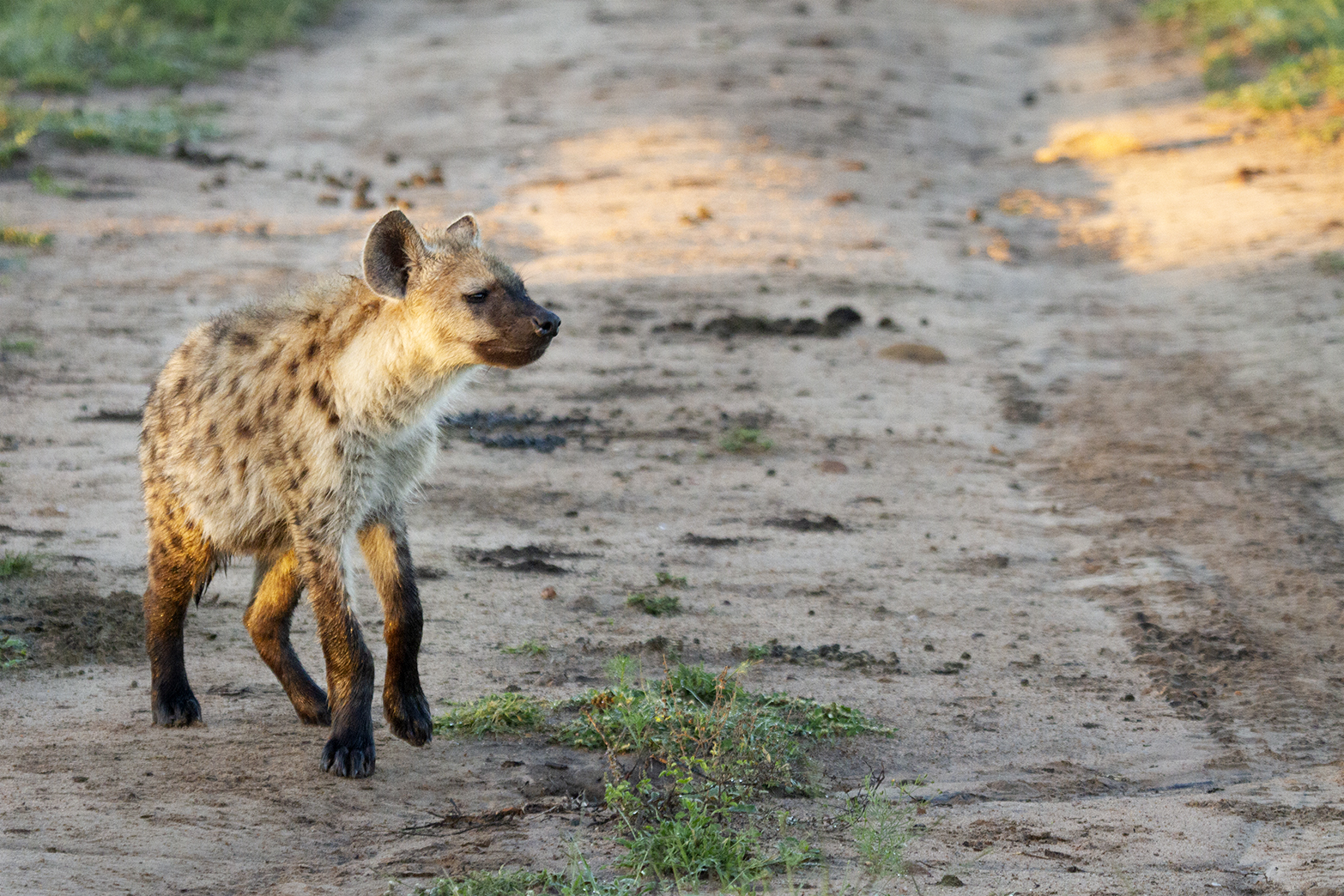 Image above: a young hyena cub sniffing the crisp morning air and listening for any communication from the adults.

And like it was scripted, we heard the male rasp again!

Wasting no time, Chris drove us straight towards a “boundary road” with neighboring lodge, Lion Sands Game Reserve. Chatting to another ranger on the radio, who he believed was closer to where he thought the male had called from. Still in awe of our last sighting. Our adrenaline spiked once again! A male leopard on patrol…we heard him! And we were close!

We turned onto the boundary road, and like the main character entering the Sabi Sands stage, there he was on patrol. Just walking down the road as casual as you like… classic! But there was a pending problem… Tengile River Lodge shares an unfenced border with the iconic Kruger National Park, and the male leopard was moving straight towards it. A boundary we are not permitted to cross… so unless he changed direction, we potentially had precious little time with him. Such is the luck of sightings sometimes, animals can cross boundaries we humans cannot. 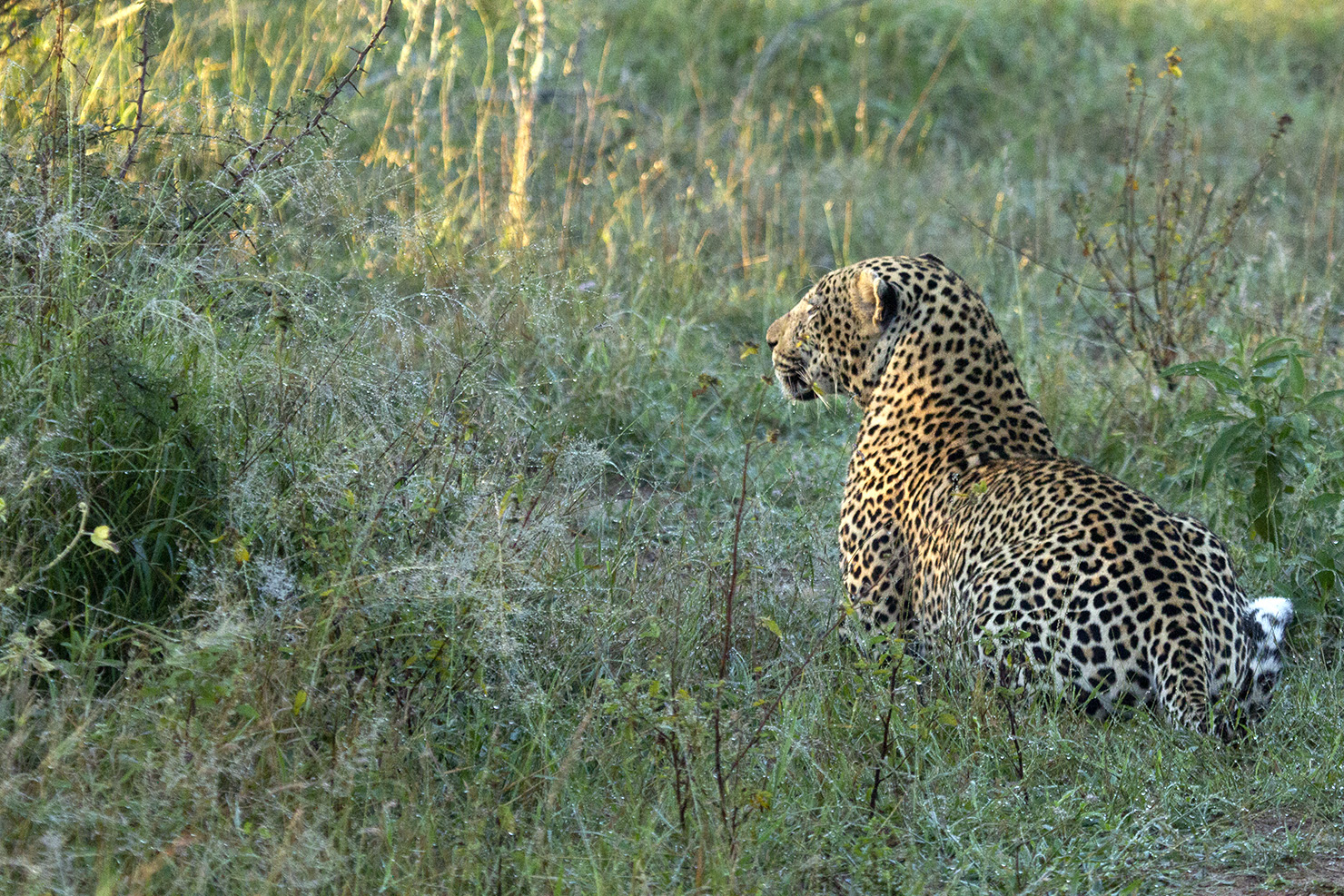 Fortunately, one of the andBeyond vehicles graciously moved out of the sighting so that we could view the male before he walked into the Kruger National Park. andBeyond and Lion Sands have a limit to the amount of vehicles in a predator sighting, this helps to manage any potential pressure on the animal, so we were thankful for the team working so cohesively together! 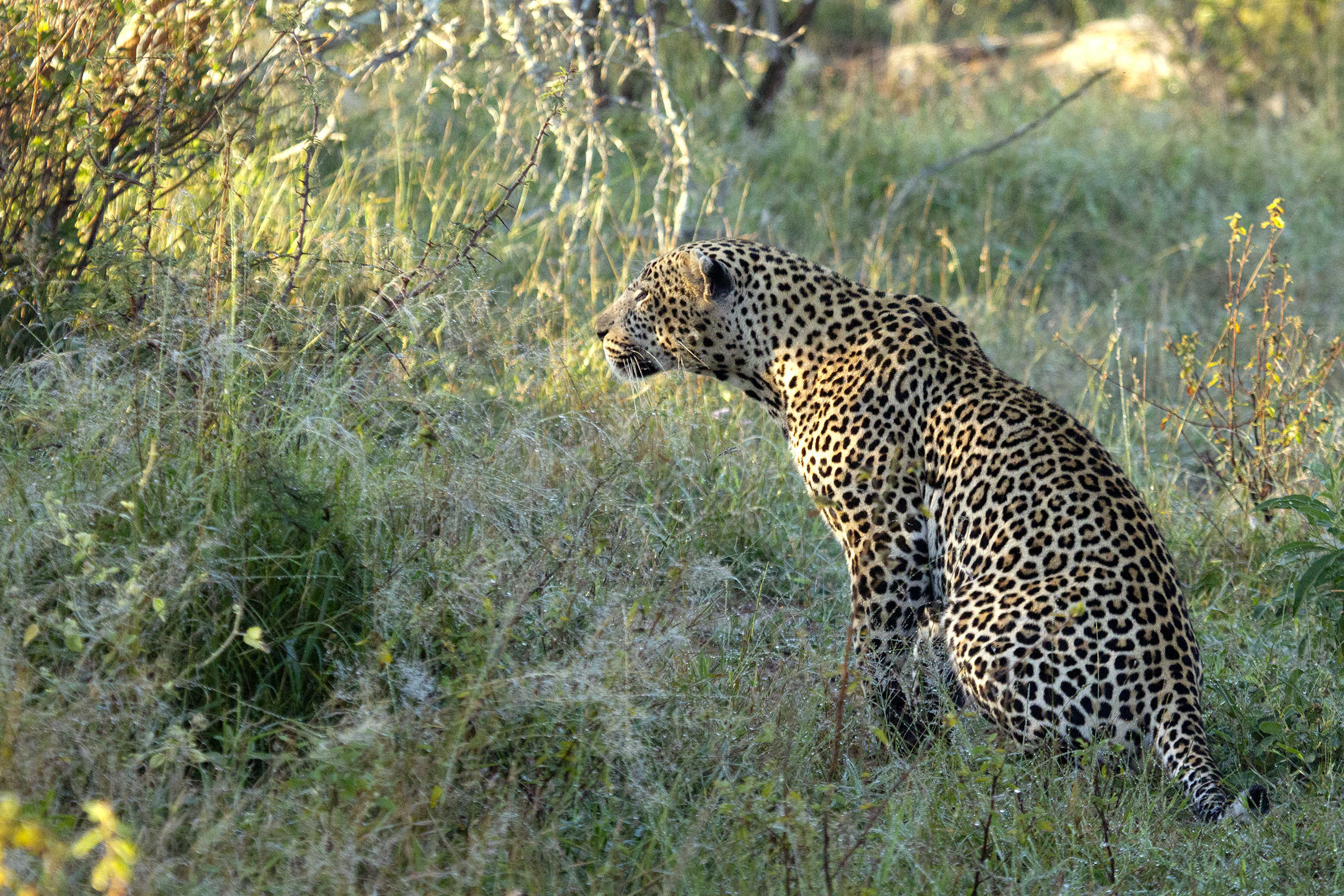 Image Above: the male leopard watching a herd of impala in the distance grazing. In this image, he is looking straight into the Kruger National Park, South Africa.

Tengile River Lodge was not finished delivering the magic! Returning the favour after a magnificent sighting, we left the male leopard, allowing space for another vehicle to move in for a brief view. 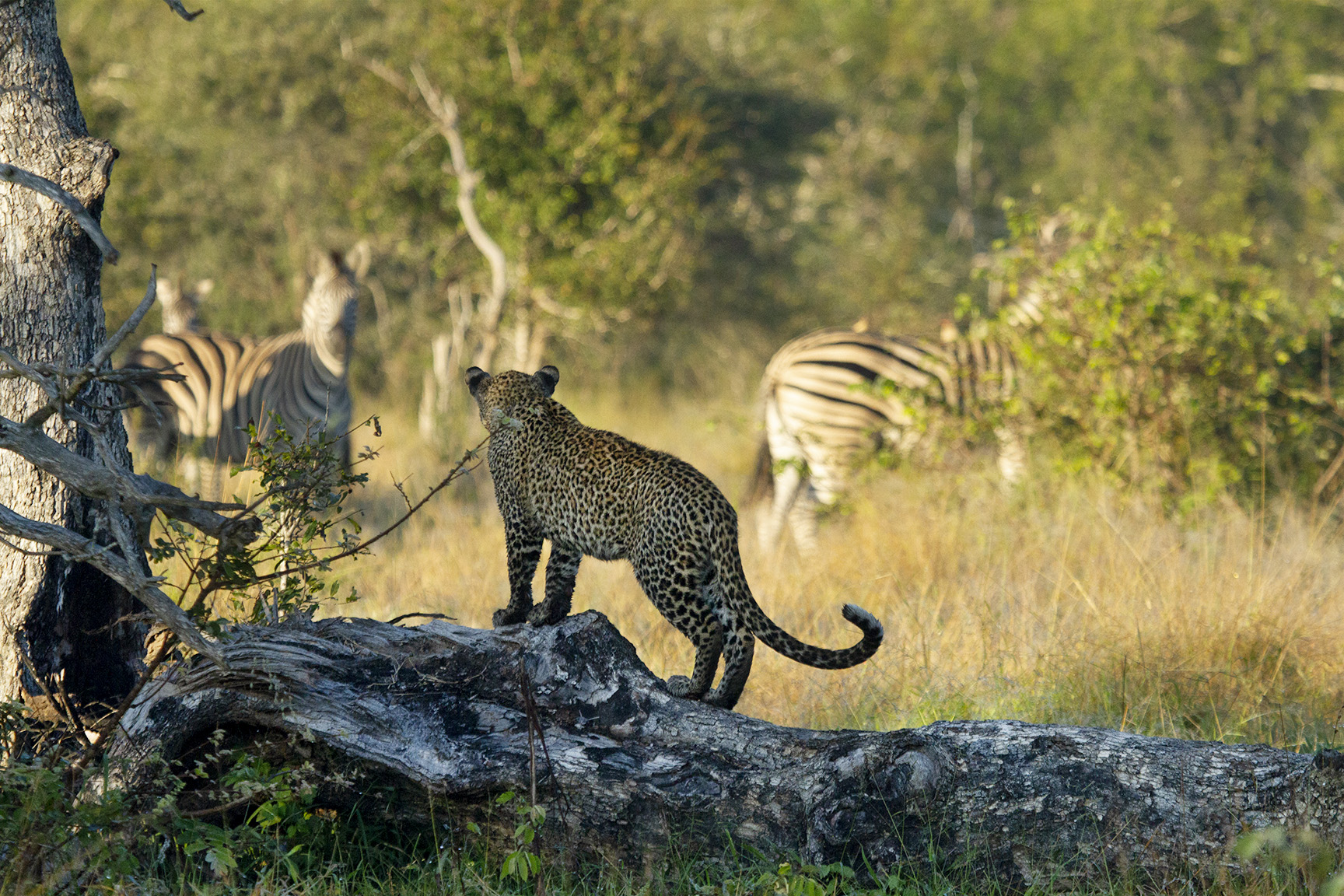 There is no need for exaggeration here… We drove maybe four minutes down the road and as we turned the corner into an open area, there was a second female leopard with cubs! We just couldn’t believe what was happening! Chris, abandoning our plans to enjoy a coffee, turned into the open area and positioned us to watch the leap move towards a fallen over tree! 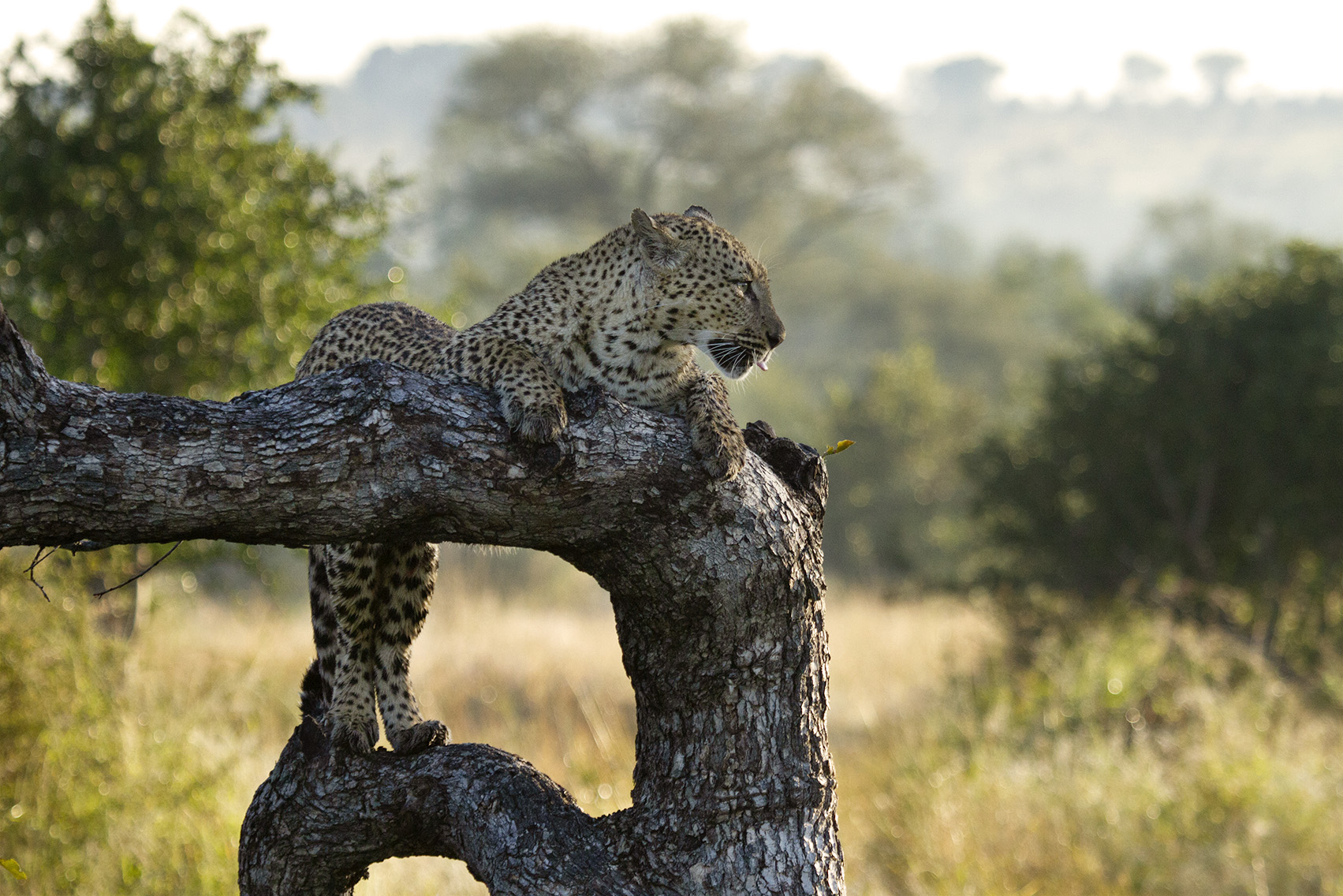 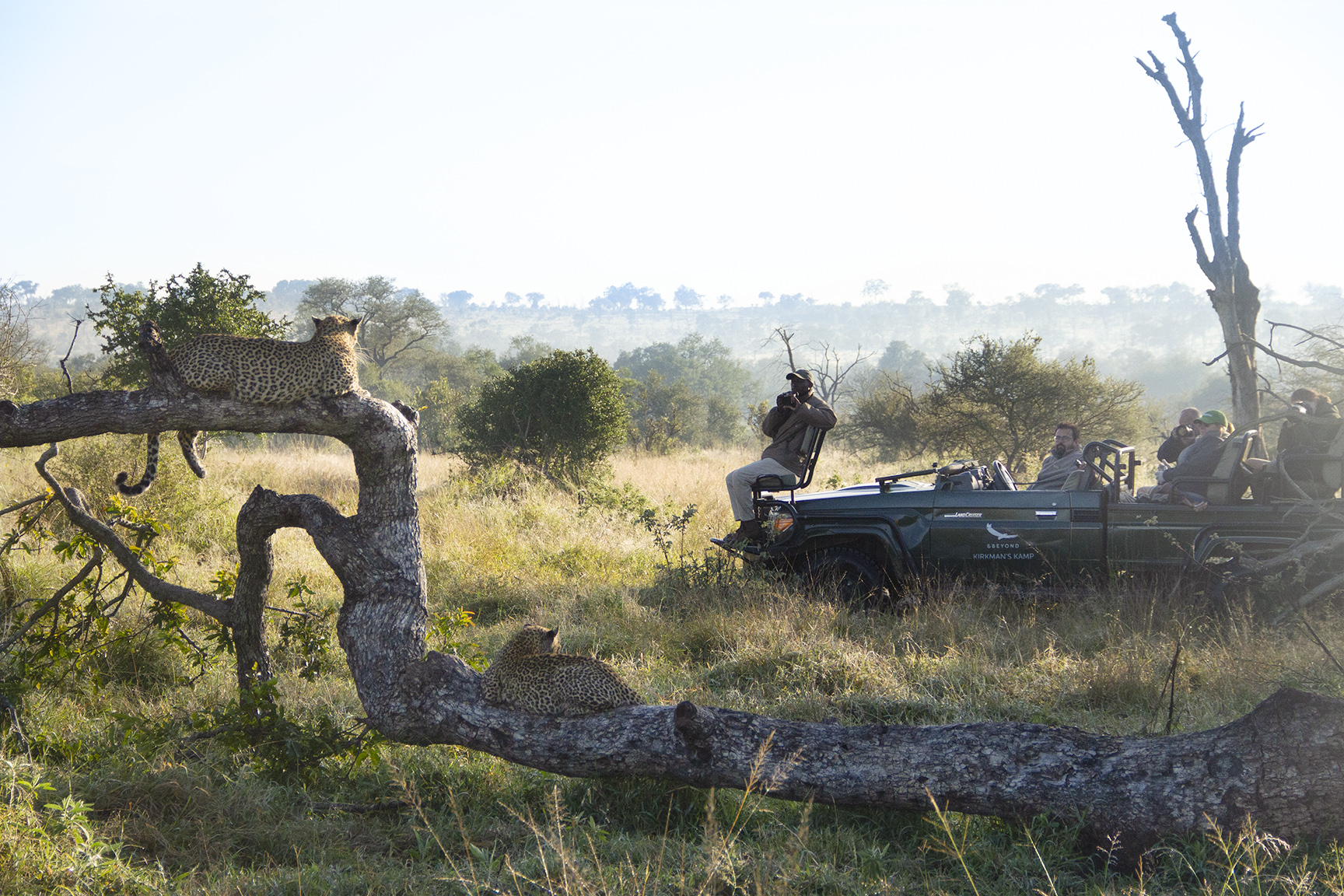 6 leopards in one morning and we haven’t even reached 8:00am! Incredible, unbelievable. And that’s the Sabi Sand Game Reserve for you! What a wonderful wildlife spectacle! 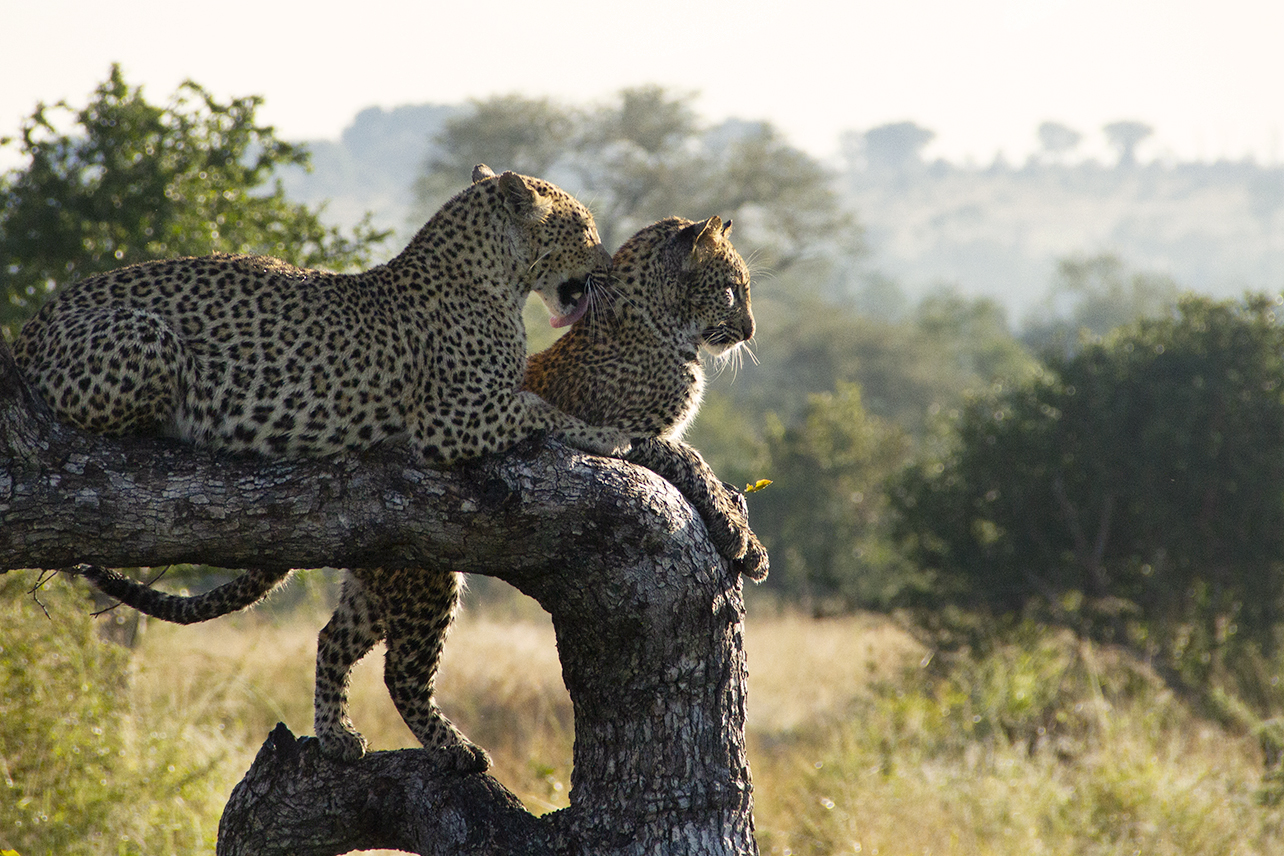 We remained watching the female and her two cubs for sometime, with just us and another andBeyond vehicle in the sighting. With the cubs being a lot older than the previous ones we saw, they were quite adventurous and playful. Dazzled by some zebra, the cubs would move away from their mom and position themselves between the branches of the tree. Only to return periodically for a comforting groom, before exploring further. We, briefly, even had a white rhino join us before heading off into the bushes.

After perhaps an hour of watching this wonderful scene of wild leopards just going about their lives like we weren’t there, a Lion Sands vehicle asked to join the sighting. It was our turn to give another vehicle the pleasure we had enjoyed! So we left the sighting in search of a spot for a well-deserved coffee break. A remarkable morning for sure! 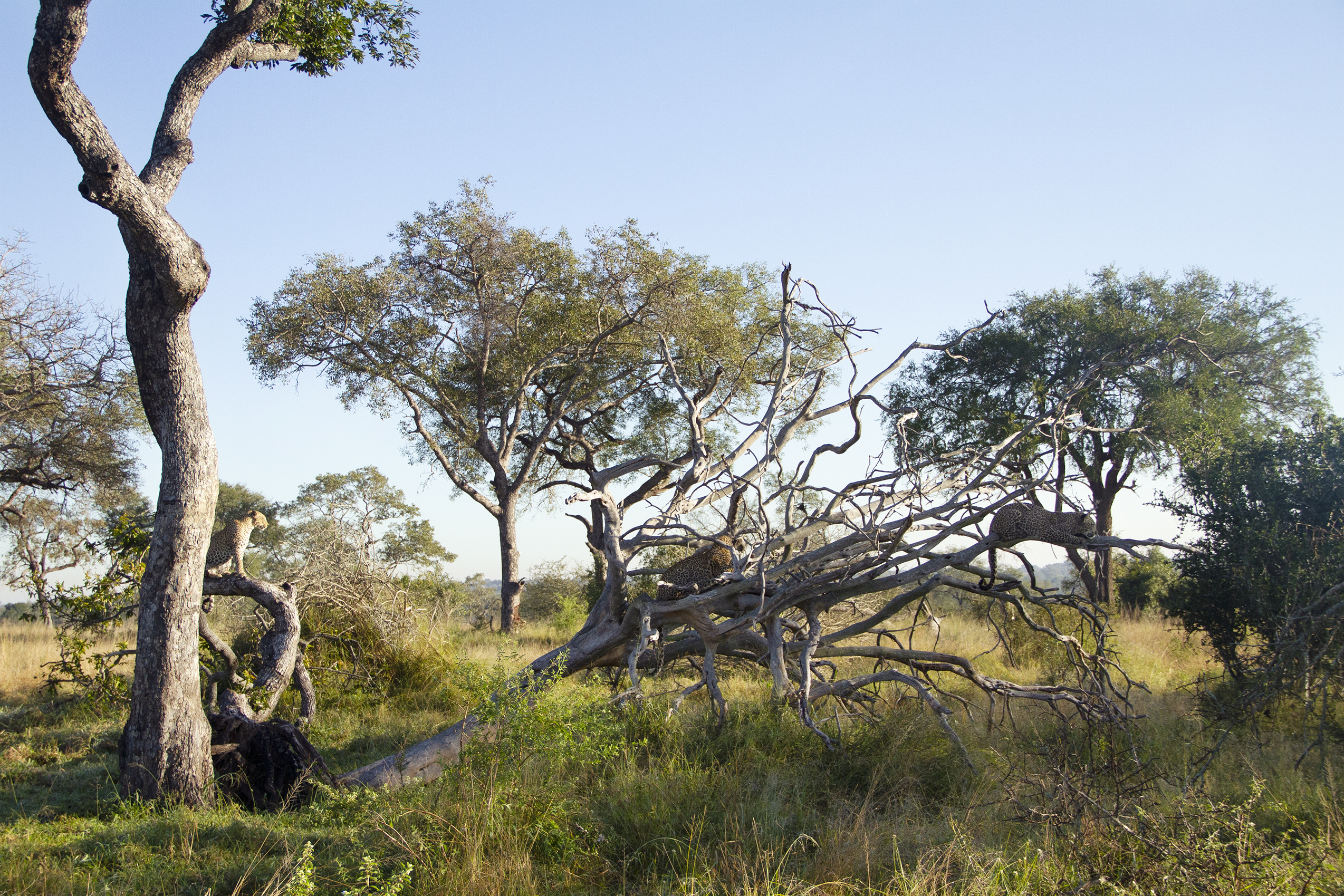 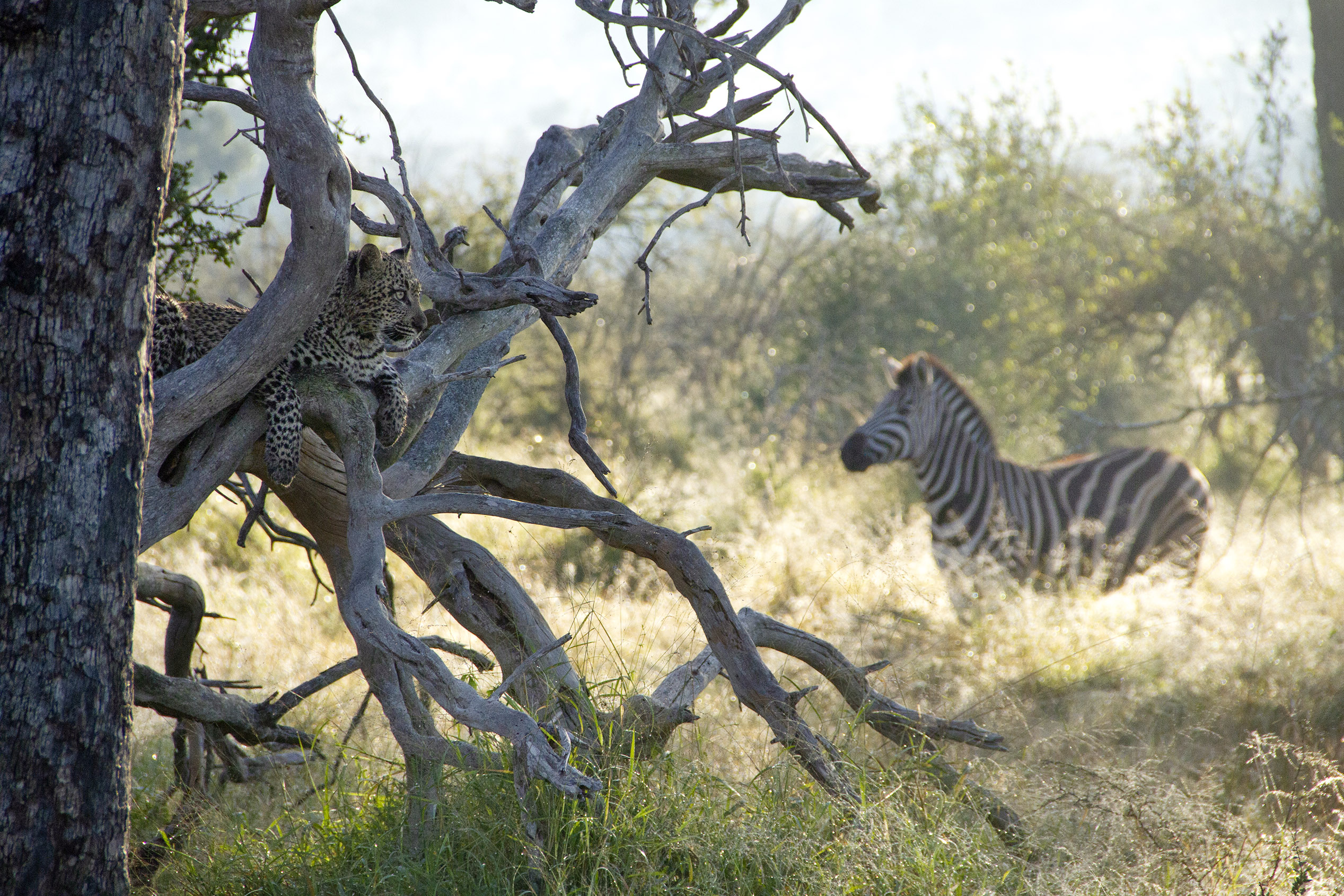 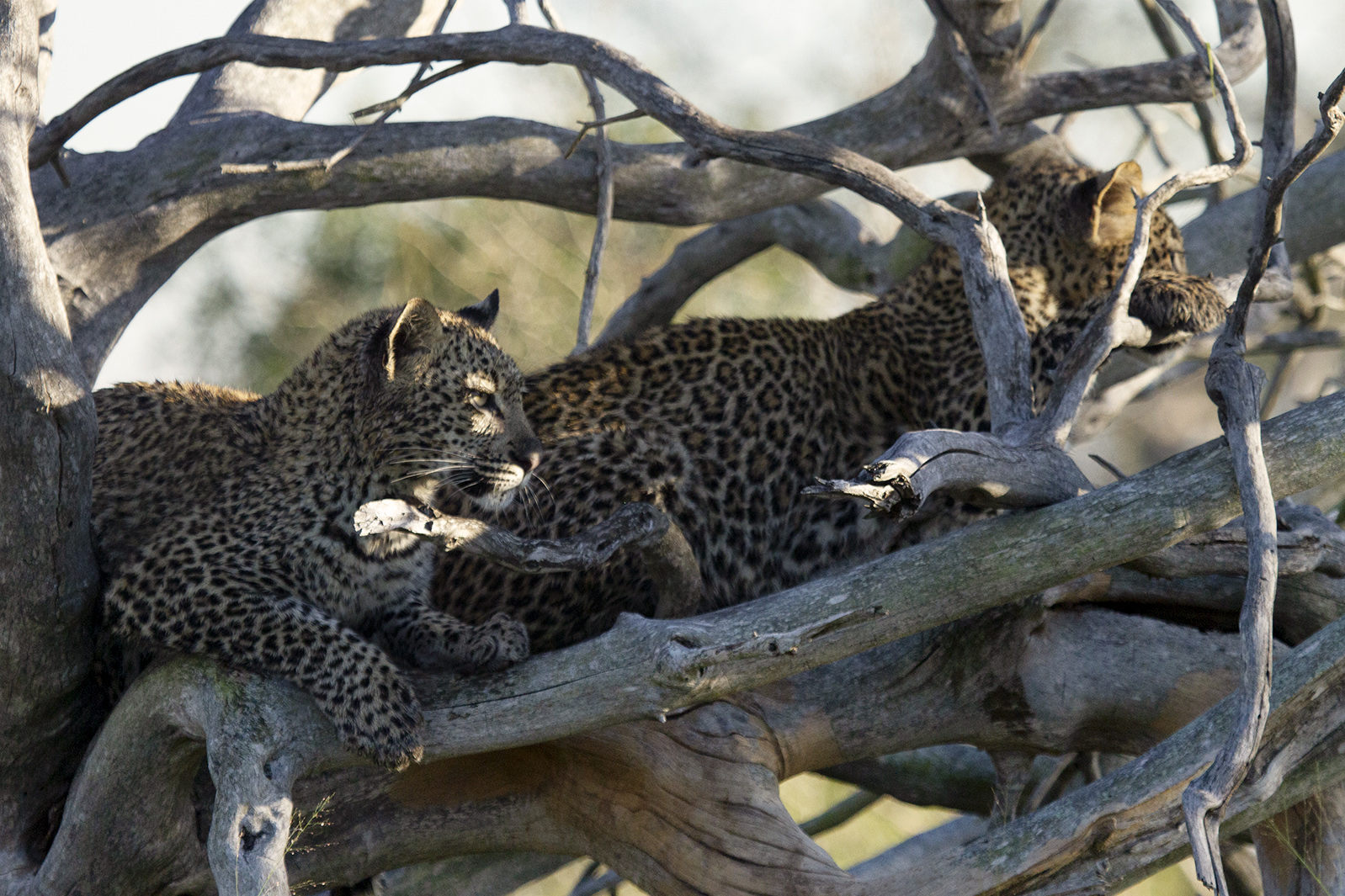 Image Above: Two leopard cubs watching a herd of zebra grazing in the distance. 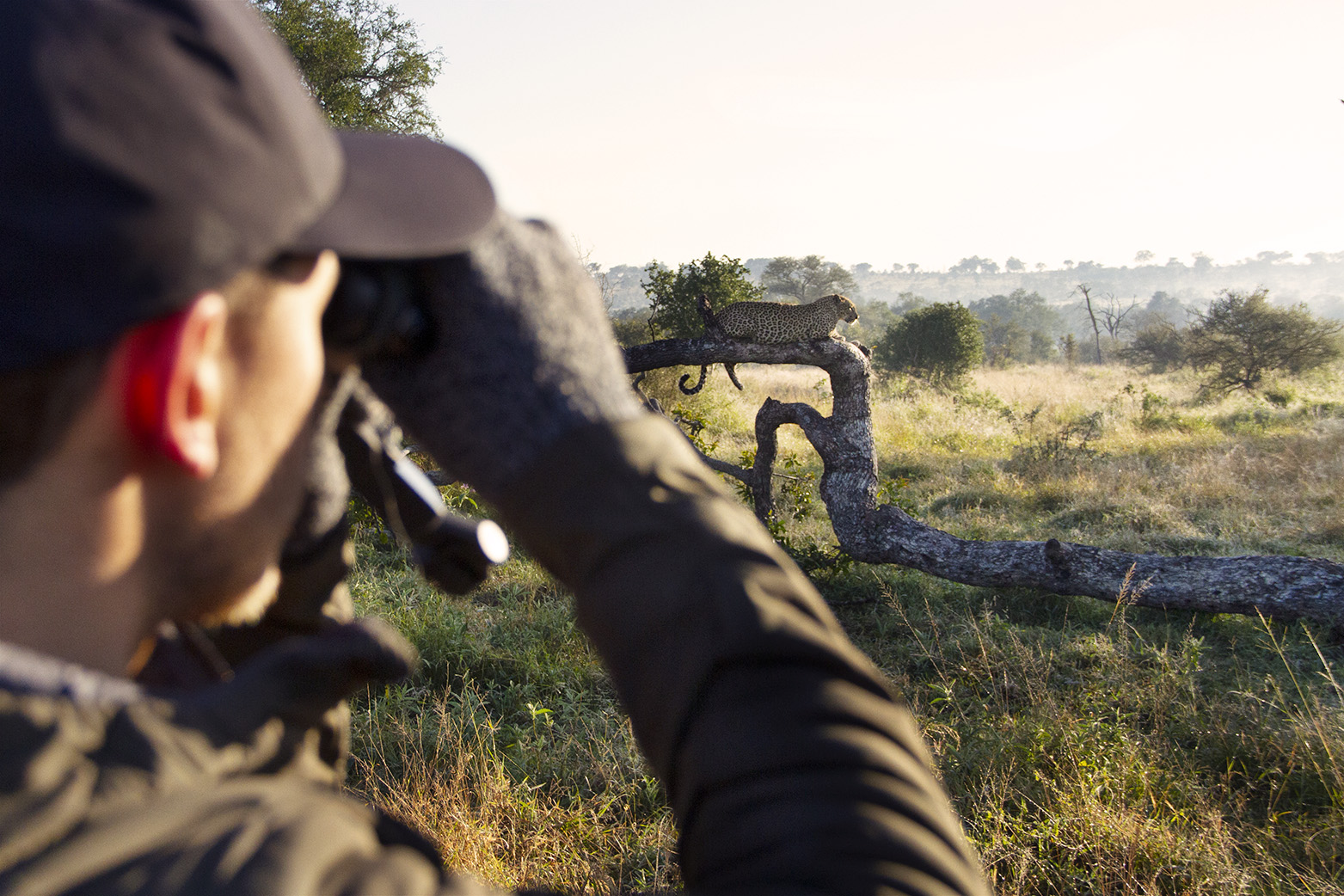 It is no secret that the Sabi Sand Game Reserve is an incredible place to view these elusive cats. With a history of ethical guiding practices, these wild solitary animals have become more accustomed to vehicles, providing consistent and relaxed leopard viewing. 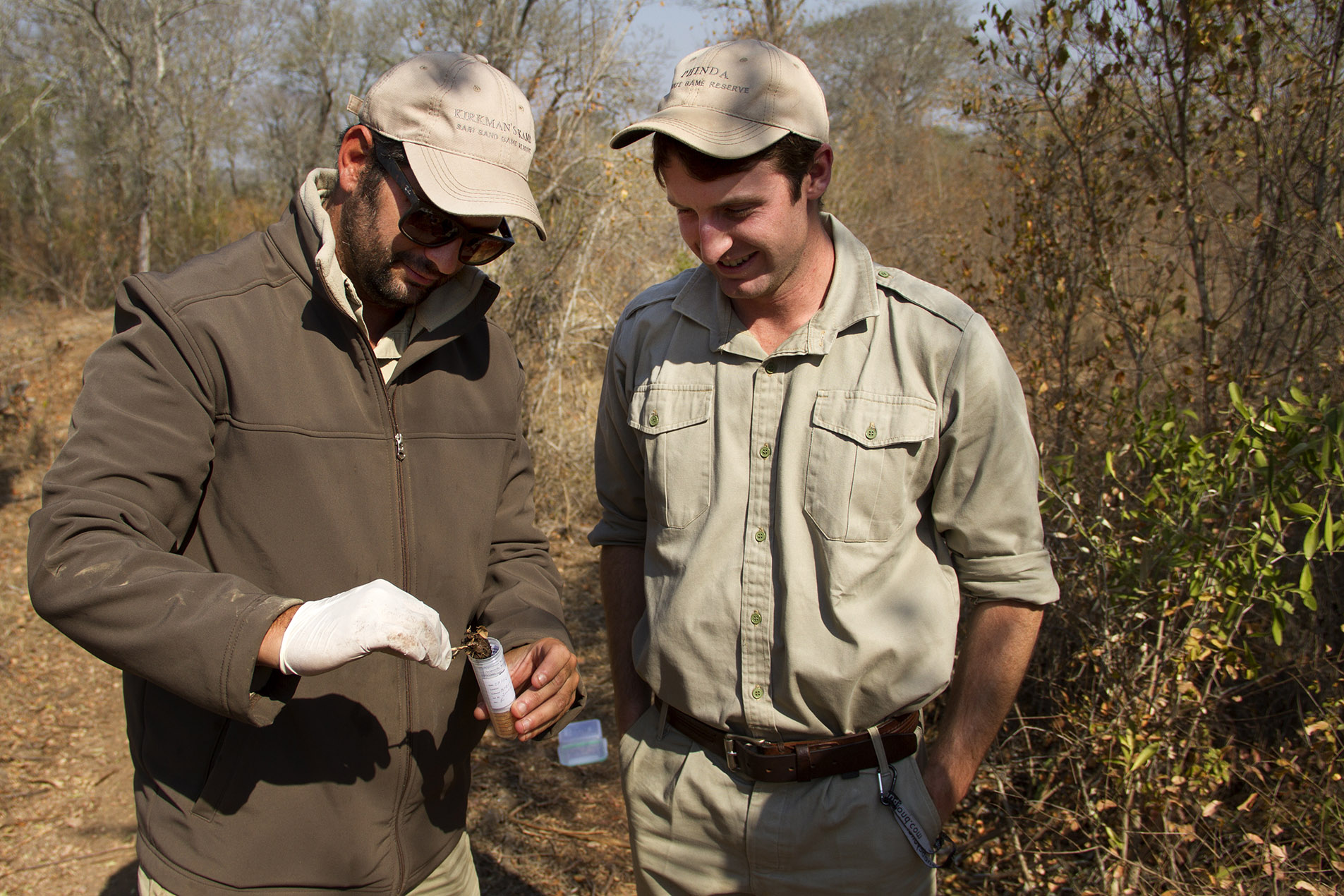 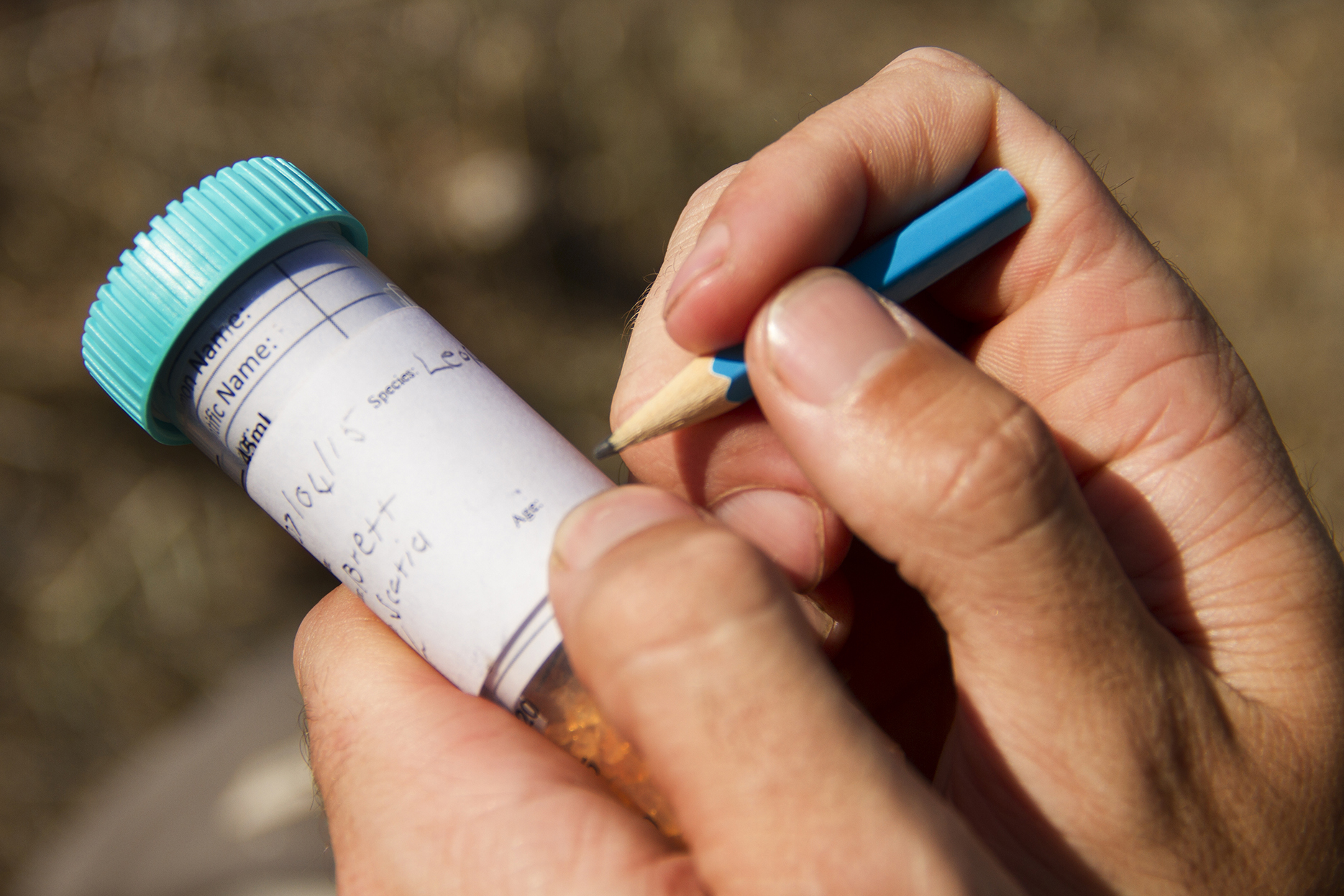 Image above: andBeyond guides collecting leopard faeces for Panthera, an organization dedicated to wild cat conservation,  to add to their genetic data base.

andBeyond Tengile River Lodge and its neighboring sister camp, Kirkman’s Kamp, has worked in collaboration with Panthera, an organization dedicated to wild cat conservation, for many years. By collecting data on leopard movements, behaviors and even faeces, Panthera has been able to learn more about leopard dynamics. This has provided vital information, providing organisations with the science to create and enforce legislation and conservation practice to better protect this umbrella species. And by protecting leopards, we are also further conserving the entire ecosystem that leopards rely on. When you visit, ask the guides about this, and they can even show you the processes they go through to collect data for Panthera!

Video above: an interview with Guy Balme, Deputy Executive, Conservation Science , at andBeyond Tengile River Lodge. Explaining how Panthera is working with lodges like Tengile River Lodge to help better protect leopards within conservation areas and even beyond the boundaries of protected areas.

So where is this Tengile River Lodge…

andBeyond Tengile River Lodge is in the Sabi Sand Game Reserve, South Africa. With just a short 45 minute Airlink flight from Johannesburg and a quick 20 minute game drive, you can find yourself in the most tranquil spot in the reserve. Beautifully situated on a bend of the Sand River, your safari experience can quite literally start at your private plunge pool, or outdoor verandah! 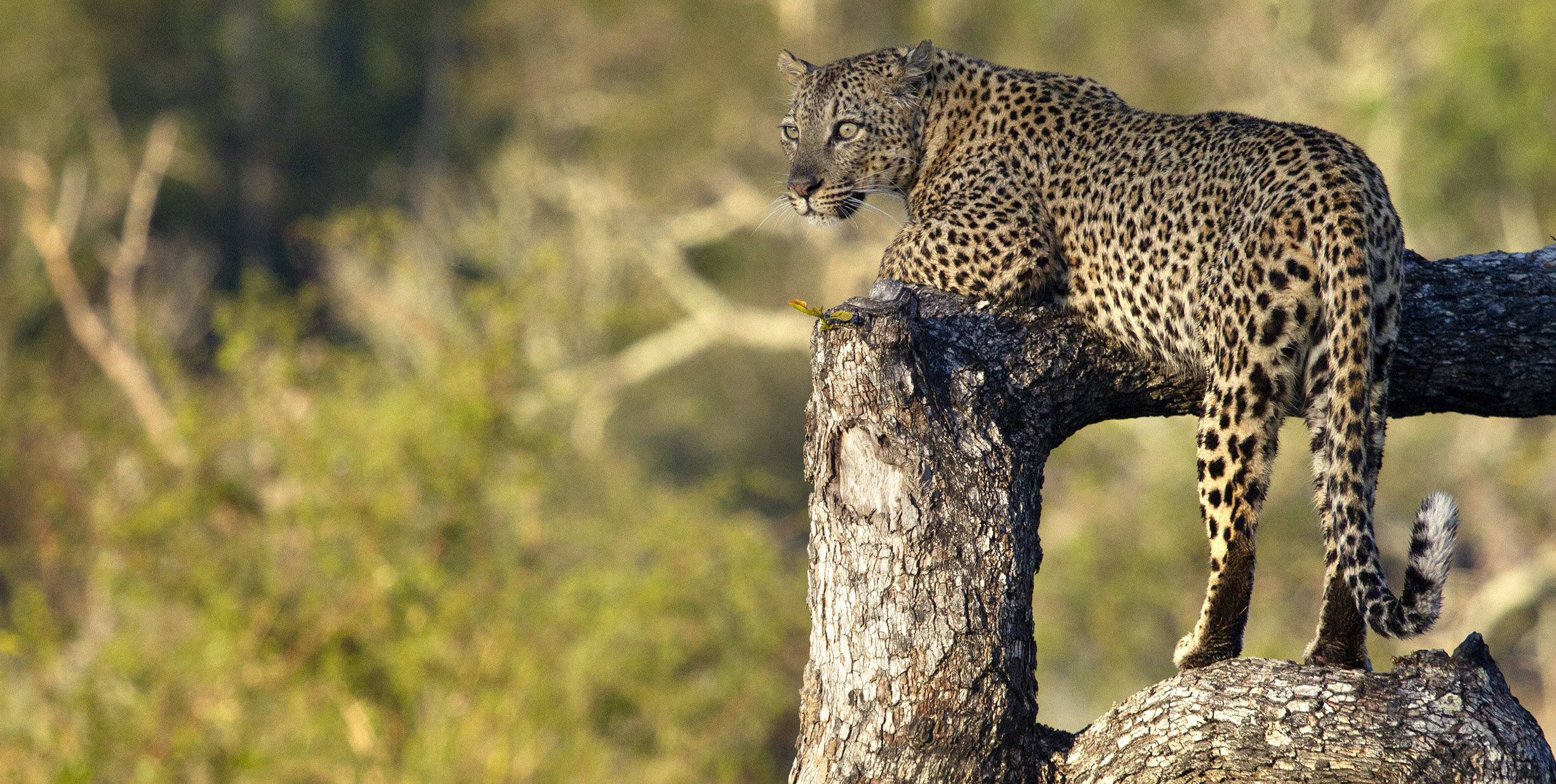 Are you ready for the trip of a lifetime?

If you’re thinking of planning a trip, we’re here to help! Our team of travel designers will create an itinerary just for you to create memories to last a lifetime and conquer your bucket list. Get in touch with us today to start planning your adventure in Africa.

Seychelles is an idyllic archipelago of 115 island

Forming a vital part of the Serengeti Mara ecosyst

A meerkat digging for food as the sun begins to se

Voted the best safari lodge in Africa for 2022 by