What Animals Will I See on Safari in Africa?

We are often asked what animals will I see on safari in Africa? In fact, I’d go so far as to say it is the most popular question we get from our clients!

People visit Africa for its incredible culture, scenery and adventure, but more than anything, they come to see wildlife. African safaris draw millions of travelers from around the world each year, all eager to catch a glimpse of the animals seen on The Lion King and iconic National Geographic documentaries. And while you won’t find tigers or bears in Africa, you’ll be blown away by the diverse and breathtaking wildlife you’ll encounter on your next safari.

What animals will I see on safari?

The term “Big Five” originally referred to the five large African mammals that were most difficult to hunt: the lion, leopard, rhino, elephant and African buffalo. Today, these creatures are highly protected and are a highlight for safari-goers to see on game drives.

Buffalo – It’s typical for the African Buffalo to roam in herds and while a magnificent sighting in the wild, these strong and sturdy creatures can be quite hostile and sometimes unpredictable in their natural habitat, so it’s important to maintain a level of respect and observe from a distance. You’ll find buffalo in most safari destinations.

Elephant – As the largest living land animal on earth, elephants are highly intelligent, very strong, and have an extremely unique physique. While they can be found all across Africa, you can experience these peaceful creatures in large herds in Zimbabwe and Botswana. A herd of elephants reaching 50,000 is an astonishing sight! 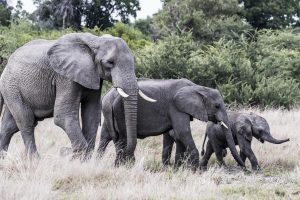 Leopard – The African leopard is primarily found in sub-Saharan Africa, and possesses great athleticism while climbing, swimming, and dragging prey. They are difficult to spot due to their nocturnal nature and sometimes skittish behavior around humans, but if you’re lucky enough to spot one, you’ll most likely find them safely perched in a tree. South Africa and Zambia are great places to see these creatures in action.

Lion – One of the most sought-after and magnificent sightings while in Africa, lions are quite social, but also spend a lot of time at rest and are most active during early morning and late evening. Unfortunately, they are slightly endangered by human expansion in Africa. You’re most likely to see lions in South Africa, Namibia, Botswana, and Tanzania. 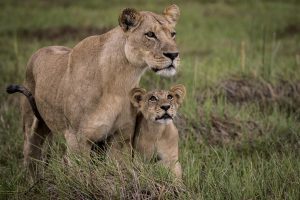 White Rhino – One of two main rhino species in Africa, the White Rhino can be distinguished by its mouth shape and larger frame. They have a wide squared off lip that allows for eating short grasses that grow in the open savannahs. Unfortunately, rhinos have been the target of poaching throughout Africa, but it’s typically easier to spot White Rhinos. Your best chance of seeing them is in South Africa and Botswana.

Black Rhino – Black Rhino are more difficult to find in the wild, largely because there are less than 5,000 left in existence due to widespread poaching. Unlike White Rhino who commonly congregate in groups, Black Rhinos are more likely to be found wandering alone. Namibia has seen successful conservation efforts, and thus has the largest concentration of Black Rhinos on the whole continent, Kenya is also a great spot to see them. 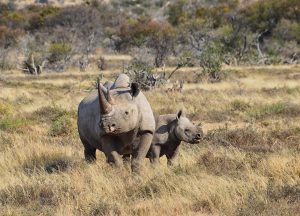 Even More to See

Antelope – There are three main subtypes of antelope in Africa: the Wildebeest, Topi, and Thompson Gazelle. Given their natural athleticism, each of these subspecies range in weight from 150 to nearly 600 pounds, have ties to sheep, goats, and cattle, and mainly adhere to an herbivore’s diet. You’re able to spot them in most savannas and seasonally flooded grassland. 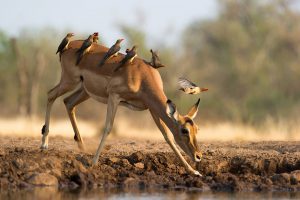 Baboon – Baboons date back nearly 2 million years, have five subspecies, and vary in weight from 30 to 80lbs. They have a hearty diet and live and travel together in troops. There’s a dense population of baboons in Kenya, wherein they spend most of their time in the savanna, semi-arid habitats, and occasionally tropical forests.

Cheetah – A classic safari animal known for its great speed (of up to 70 mph!) and lean bodies, cheetahs can be found in Kenya and Namibia where they are able to run far and wide and hunt for prey. 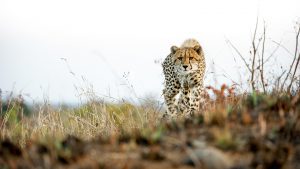 Giraffe – It probably doesn’t come as a surprise to anyone that the giraffe is the tallest animal in the world, but what many don’t know is there are actually nine subspecies of giraffe in Africa and they camouflage quite well with their surroundings. Luckily, you can spot them in most countries in Southern and Eastern Africa. 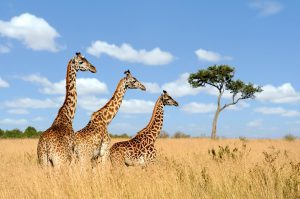 Hippopotamus – Zambia and Botswana are home to some of the world’s finest hippo populations. They are generally most comfortable in the water, but be careful not to get too close; hippos can be aggressive if provoked and move rather quickly on land. Should you sneak a peek safely, try to look for their webbed feet and enormous tusks!

Hyena – Considered one of Africa’s most successful predators, hyenas have formed quite a different reputation from their true nature: one that is loving, social, and intelligent. These apex predators roam in packs and contribute to disease prevention, as well as control prey populations.

Primates – Trekking to see wild primates in Africa is a bucket list experience you cannot miss! Getting up-close with some of our closest relatives is sure to be one of the most memorable wildlife encounters out there. Mountain gorillas and chimpanzees can be found in Rwanda and Uganda (chimps in some parts of Tanzania, as well). Golden monkeys are also exciting to see – as they stay on the move in the treetops above.

Nile Crocodile – One of the fiercest and oldest reptiles in history, the saltwater crocodile is typically quite long and can be located in sub-Saharan Africa in various lakes, rivers, and deltas. Their ability to execute a sneak attack makes them one of the biggest predators on the whole continent and not subject to endangerment.

Warthog – Warthogs are technically wild pigs, and they are quite prominent in Africa, so your chances of seeing one during your safari are very high. They are covered in thick, coarse hair and possess four tusks on their head. Generally they abide by an herbivore’s diet and seek shelter in caves.

Wild Dog – Characterized by white, brown, and black fur, wild dogs form large packs,  in which they communicate through distinct high-pitched sounds. Within this social order, they hunt and kill their prey together using exhaustion tactics. Unfortunately, these highly efficient carnivores are endangered, but your best bet for spotting them is in Botswana, South Africa, and Zimbabwe.

Zebra – What many don’t know is that there are actually three types of zebras throughout Africa, including the endangered Grévy’s Zebra, all of whom have distinct and highly individualized patterns on their coat. They are often found in herds and befriend the wildebeest. Head to northern Tanzania or northern Kenya to catch a glimpse of these black-striped beauties.

Ostrich – Ostriches can be located throughout Kenya, and is one of the only birds that doesn’t fly. Due to their preference for the ground, they possess strong legs for running and large wings that they’re likely to spread to attract potential mates.

Bee Eaters – What once began as a single species has now broken into 27 subspecies, and become a favorite of birdwatchers. As their name would imply, they like to feast on bees and other insects and are mostly a vibrant green, blue and orange shade, known for their lightning speed. You’re sure to find them near rainforests and savannas. 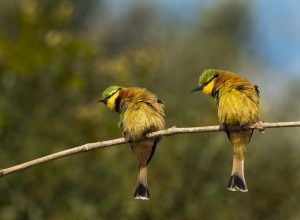 Vultures – Although populations are declining throughout Africa mostly due to unfavorable contact with humans, there are 11 species of vultures, all of whom are ferocious and fascinating. They play a critical role in disease prevention and thrive in Eastern and Southern Africa.

Hornbills – These distinct looking creatures make their habitat in forests, rainforests, and savannas, depending on the species. They function during the daytime, are often found socializing with other animals, and were named according to the shape of their beak and its resemblance to a cattle horn. Catch them in action in sub-Saharan Africa.

There are so many extraordinary types of wildlife all throughout Africa, and a safari gives you a front row seat to witness all the action! Regardless of how many times you’ve been on safari, each game drive is unique, bringing you new and exciting sightings, and lifelong memories of your time in Africa. We hope that on your next safari, you’ll see all of the above, and so much more.

The Best Modes of Transportation in Africa

Pre-Travel Checklist for Your African Safari

INQUIRE NOW
What Animals Will I See on Safari in Africa?2020-08-062020-12-13https://www.ubuntutravelgroup.com/wp-content/uploads/2018/02/utg-logo.pngUbuntu Travel Grouphttps://www.ubuntutravelgroup.com/wp-content/uploads/2020/08/what-animals-will-i-see-on-safari-banner-image.jpg200px200px
Ubuntu Travel Group